I'll try to keep this short....First, we will be moving to South Central Missouri.  Now the back story....condensed version .On one of my recent camping trips, `sitting and sipping a whiskey watching the Sun disappear below the horizon I starting thinking about the future and how this past year has highlighted how fragile life is and that We're not "bullet proof" . My thoughts drifted as to  where my Bride would want to live if she were alone.  When I returned back home I posed the question to her.... if anything were to happen to me(I am 10 years older than her) where would you like to spend the rest of your years....anywhere was open for discussion.( was hoping she would say New Zealand).😏 she really didn't want to  discuss "negative stuff"...Finally got passed that and the short version was she liked the area around Big Cedar Lodge, in Southern Missouri.. We went house hunting on line and found a home we liked, put in an offer and bingo, we close this month.. The new home is close to Janet's Sisters and the Kids.

I will miss Texas, its culture, values, people and most of all, the many friends I have made. I'll be returning for many visits to friends and to continue to explore its magnificent and diverse landscape!

Second. I forgot to mention in previous blogs that I got a new truck. Nothing wrong with the Ram that I had.....except one minor detail. I asked Janet to drive one day as an old ankle injury was acting up... Bottom line , she could barely touch the gas and brake pedals...no way could she drive it safely. I always kid her about having 12 inch legs. :)) I still wanted a truck,  I went for a mid size. Ended up buying a GMC Canyon All Terrain 4x4. Got it last November, it towed the Casita with no problem.  Need to remove the cabover and place the Alu-Cab Canopy on it, hopefully in the near future. 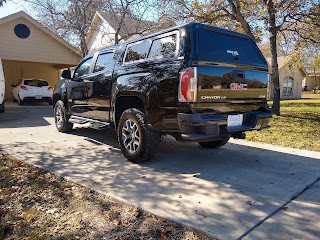 Speaking of the Alu-Cab Canopy Camper, it  has arrived on the East Coast and should be in transit to the folks that will install it. The first order of business is get the electric (12 volt) system set up. I'm still debating about getting a all in one solar generator system such as Jackery or Bluetti,  or going with the norm type of system 12 volt set up,( 200 amp hour lithium battery, solar panels, mppt controller fuse box, inverter, charger, etc)  still doing some research. 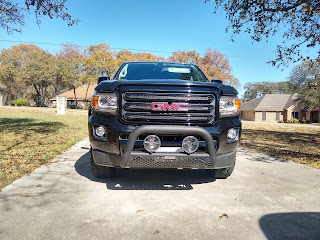 Now you know what's happening Deep in the Heart of Texas...and the future in the Land of Oz....well near it. Until Next time...... Let's go out and make a Memory or three!!  Horst sends

Can't close without a sunset.😊

if you wish to write an email the address is:
horstkelly31@gmail.com